Home / Blog / Hello to Kip! Our Snowdog by the Sea artist…

Hello to Kip! Our Snowdog by the Sea artist…

After the exciting Snowdog by the Sea artist showcase event on Brighton Pier, we have now been paired with our chosen artist and we couldn’t be happier.

We would like to introduce you to Kip, below is a short bio of how she grew her love for painting and her achievements along the way;

Kip was born in Joplin, Missouri USA and is a self-taught painter. She joined the Navy in 1982 and was stationed throughout the South where she discovered a cultural awakening. She ended her tour in Virginia Beach, Virginia where she opened a hat shop called “The Hat Attack”. The shop reflected her love of hats, which she later incorporated in her art.

Kip later worked for Carnival Cruise lines with her husband and sailed throughout the Caribbean, experiencing the various cultures there. Kip attributes these “adventures” to the bright colours and native cultures of the islands in her art. Kip returned to Missouri and graduated from Missouri Southern State University with an Associate in Law Enforcement and Sociology and a Bachelors degree in Criminal Justice Administration. She moved to Springfield, Missouri to work as an officer with the Department of Probation and Parole, and while there, earned a Masters degree in Public Administration at Southwest Missouri State University.

Longing for the South and the East Coast, Kip moved to Pawleys lsland, South Carolina and taught Criminal Justice and Political Science classes at a local college. After a serious injury that left her unable to teach, she discovered painting.

ln her paintings, Kip displays the love for bright colours and the cultural lessons learned in her travels. She has a long-term affection for humour in her designs, which gives her pleasure and a means to share her joy with others. She was featured in various galleries through the South, and Washington DC, on the cover of 4 magazines, various newspapers, featured artist in 3 One Woman shows, Piccalo Spoleto art show for 4 years, many art shows and was in a museum in Charleston, SC.

Kip shares her late father’s dedication to community and has painted numerous murals and original works of art for local charities. She received the Volunteer of the Year award in 1998 and Community

Service Award in 2004. She is a past member and past Vice-President of the Seacoast Artist Guild, a member of The American Folk Art Guild, a past Executive Board member and Secretary of the Charleston Artist Guild. Her art was collected not only regionally, but nationally and internationally.

She now lives in Hove (actually!)

Kip has recently created a “bear” for the tour of the Algarve area of Portugal – see pictures below; 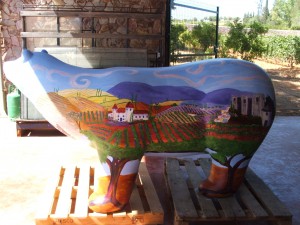 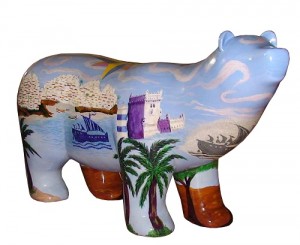 Her work always has humour in it and she hopes this will shine through in the Snow Dog, The Legal Beagle.

This website uses cookies to improve your experience while you navigate through the website. Out of these, the cookies that are categorized as necessary are stored on your browser as they are essential for the working of basic functionalities of the website. We also use third-party cookies that help us analyze and understand how you use this website. These cookies will be stored in your browser only with your consent. You also have the option to opt-out of these cookies. But opting out of some of these cookies may affect your browsing experience.
Necessary Always Enabled

Any cookies that may not be particularly necessary for the website to function and is used specifically to collect user personal data via analytics, ads, other embedded contents are termed as non-necessary cookies. It is mandatory to procure user consent prior to running these cookies on your website.